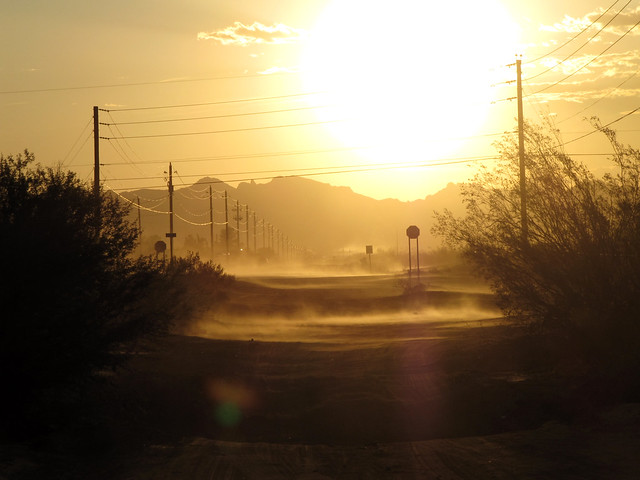 While siting in my chair, ipad on my lap, feet up on the ottoman, I heard a loud, rushing noise like a freight train. When you’ve lived in the desert awhile, you quickly learn to recognize that sound…and not only recognize it but ACT…quickly…it’s a windstorm. It doesn’t gradually build into a frenzy…nope…it hits full force, all at once.

As 80-90 mph wind sliced through the desert like a Master Chef’s knife slices with precision through a side of beef, trees were falling, shrubs were rolling, power lines were sent to the ground (30,000 customers lost power), roads were closed and all those nice, homey embellishments on your patio, that once belonged to you…well..they are now “community property”.

I tossed my ipad on my desk and ran for the door. As I opened it, I was greeted by an 11 foot, airborne umbrella (another necessity of desert living). I reached out to grab it but the power of the wind was so strong it slipped right through my hands. If it wasn’t for the tall concrete fence around the patio (which I now refer to as “Gods’ protective hedge”), it would be in the next county adjusting to a new home. The fence did indeed prevent the large round projectile from sailing into parts unknown, however, now I was up against the daunting task of cranking the umbrella down…while it’s on the ground…with 80-90 mph winds continuing their journey. Not an easy task and gravity, as well as the “force”, was definitely not with me.

While there are many instances of “God’s wind” doing some pretty harsh damage, there is also a another side to the Almighty’s wind…A strength that we need to learn to recognize…but not only recognize it but act quickly…

Exodus 10:19(AMP) And the Lord turned a violent west wind, which lifted the locusts and drove them into the Red Sea; not one locust remained in all the country of Egypt.

Psalms 135:5(NKJV) He causes the vapors to ascend from the ends of the earth; He makes lightning for the rain; He brings the wind out of His treasuries.

His love and support can be witnessed through His wind…

Matthew 7:25(AMP) And the rain fell and the floods came and the winds blew and beat against that house; yet it did not fall, because it had been founded on the rock.

Matthew 7:27(AMP) And the rain fell and the floods came and the winds blew and beat against that house, and it fell—and great and complete was the fall of it.

His presence can be made known…

Acts 2:2(AMP) When suddenly there came a sound from heaven like the rushing of a violent tempest blast, and it filled the whole house in which they were sitting.

And our completeness in Him…

Matthew 24:31(AMP) And He will send out His angels with a loud trumpet call, and they will gather His elect (His chosen ones) from the four winds, [even] from one end of the universe to the other.

John 3:8(MSG) You know well enough how the wind blows this way and that. You hear it rustling through the trees, but you have no idea where it comes from or where it’s headed next. That’s the way it is with everyone ‘born from above’ by the wind of God, the Spirit of God.”

Remember…Thank God for His wind…whether it’s clearing out the old or bringing in the new…it is a mighty and righteous wind.