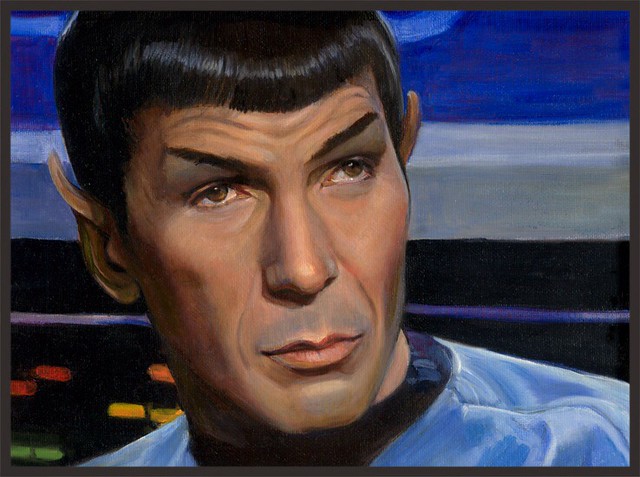 Of my friend, I can only say this: Of all the souls I have encountered in my travels, his was the most…. [voice breaks] human. ~ Captain James T. Kirk, The Wrath Of Kahn

Star Trek…I have some wonderful memories centered around this show.

When Mr. Gypsy and I were first married, we moved to the west coast of Florida. We had a darling (code word for cheap) little place on the bay side which was a two block walk to the Gulf of Mexico. At the end of every day, we would come home from work, change and head out for a walk on the beach and a swim in the Gulf. After that, we would return home, make a chocolate milkshake and watch Star Trek (Original Series). And when I say “every day” I mean e-v-e-r-y day! Those were much simpler times, remembered fondly.

There were many profound truths which were written into the dialog of the show. A lot were simply one-liners. Many came from Spock, through his logical Vulcan nature. Well…Last Friday, February 27,2015 Mr. Spock faded to black. This is my tribute to a few of those words of wisdom…(With a hat tip to Mr. Gypsy for his assistance with this entry.)

~ Computers make excellent and efficient servants, but I have no wish to serve under them. ~ SPOCK, Star Trek: The Original Series, “The Ultimate Computer”

Romans 7:6(ESV) But now we are released from the law, having died to that which held us captive, so that we serve in the new way of the Spirit and not in the old way of the written code.

~ Without followers, evil cannot spread. ~ SPOCK, Star Trek: The Original Series, “And The Children Shall Lead”

2 Timothy 2:15(KJV) Study to shew thyself approved unto God, a workman that needeth not to be ashamed, rightly dividing the word of truth.

~ It is curious how often you humans manage to obtain that which you do not want. ~ SPOCK, Star Trek: The Original Series, “Errand of Mercy”

Colossians 3:1-2(AMP) If then you have been raised with Christ [to a new life, thus sharing His resurrection from the dead], aim at and seek the [rich, eternal treasures] that are above, where Christ is, seated at the right hand of God. And set your minds and keep them set on what is above (the higher things), not on the things that are on the earth.

~ When you eliminate the impossible, whatever remains, however improbable, must be the truth. ~ SPOCK, Star Trek VI: The Undiscovered Country

Matthew 19:26(ESV) But Jesus looked at them and said, “With man this is impossible, but with God all things are possible.”

1 John 2:2(AMP) And He [that same Jesus Himself] is the propitiation (the atoning sacrifice) for our sins, and not for ours alone but also for [the sins of] the whole world.